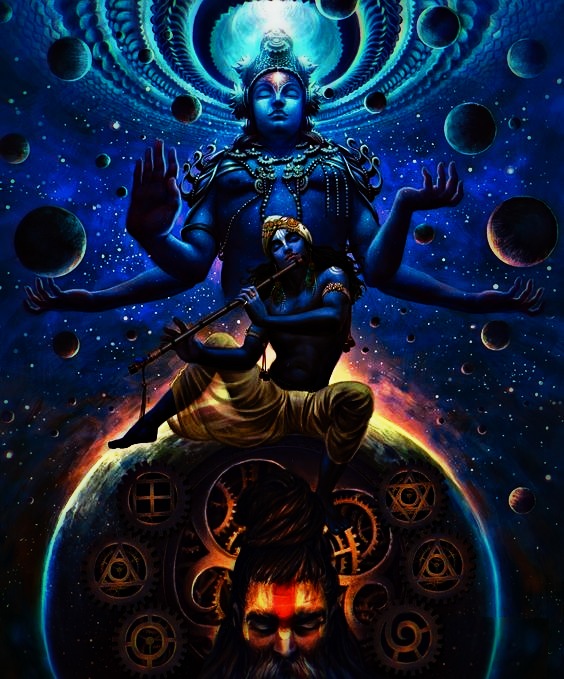 I bow to Krishna, the teacher of universe.

I’m from the Land of Yoga, Tantra & Kamasutra among countless other contributions to world🚩

First of all, very long post but give it a try, may interest you. I’ve No Intentions of hurting religious sentiments or Trigger anyone by my words. So, you can suggest me any corrections/additions. This is a Religious topic connecting to NoFap & mostly Indians/Hindu believers can understand this. But it’s open for everyone, as this is helpful in journey to Rewire ourselves.

As we have talked about Shiva previously, this time we’ll talk about Shri Hari/Vishnu/Narayan (श्री हरि/ विष्णु/ नारायण) known by many names.
According to Hindu calendar, a leap month (अधिक मास) is added every three year instead of leap day for better accuracy. Now we’re in middle of this month.
It is very Auspicious (‘पुरूषोत्तम’ मास) as dedicated to & named after Shri Vishnu as he’s bestest among all beings. He is specially worshipped in this time.

We could learn a lot from Immortal teachings preached & demonstrated by his Incarnations in this mortal world.
There’s a reason why I’m starting with his last human avatar Shri Krishna (some may wonder why included him here as he’s known to have playboy image - big misconception tho) he’s also God of Yoga (योगेश्वर कृष्ण).
He belonged to a cowherds’ community & was loved by everyone including married women Gopis who danced in love with him on his flute’s divine tunes & that was pure divine love, not anything lustful like some poets/writers described later on. He was a innocent child of age 12 that time.
Later he became a king & had Eight marriages for political relations & social reasons of that era. Also, freed Sixteen thousand one hundred queens of other kings from a Demon & gave them shelter under his name. Thus, known to have 16108 Wives, but had children with original 8 queens only.
Even then he lived life of a Brahmchari (ब्रह्मचारी) as a family-man who mates only for reproduction in wife’s period time is also considered Celibate.
He gave the most valuable knowledge of oneself to the world in form of Geeta (श्रीमद्भागवत गीता) although his whole story is full of miracles which has life lessons.
To be continued…

You can join “Stay Maryadit Challenge” now that’s strictly No PMO (No Edging). Be honest with yourself & fellow companions. Check-in here with your progress, Companions’ app streak is updated on Scoreboard. Thoughts n Suggestions are Welcome.

Requesting @Taher @moderators to change category to Accountability group & Add Scoreboard in second post.
Reviving this group as previously it closed due to inactivity. This time I’ll be more active & helpful, hopefully.
Weekly posting will be minimum necessity for everyone joining in, a warning will be given before removing for a week, if posts update again.

Bro I am in

Happy to see you bro, Share details & invite others too.

Admin/Mod should change it to editable by all.

Brother where there is Hinduism Pandeybro is always there.
जय श्री कृष्ण।

Shree Krishna practiced celibacy till marriage even after all the gopis were in true love with him. Most of the gopis did not get married and remained celibating their entire life like राधा रानी।

And we human beings saying ourselves as his followers are fapping

. Although we guys are having a complete environment of celibacy but we still look at lusty things on mobile.

Jai shree krishna🙏
Krishna means black, so lord krishna was black in color still many girls at that time was mad over him? Because of the bhramcharya, his energy was balanced masculine and so divine that people can’t take their eyes of from him. Many people get confused with his wifes and lovestory with maa radhe rani because they try to understand it with their mind, which is impossible for us. As shree krishan was the form of divine himself, radhe rani and other gopis were also balanced feminine which used to chase him. Masculine and feminine is the form of brahman, its just energy (atman) we can’t understand it we can only feel it inside us and our mind impressions and ego is the barrier between to feel that bliss. “ The senses are higher then the body,the mind higher then the senses; above the mind is intellect, and the above the intellect is the atman. Bhagwat geeta”. In the war of mahabharat, pitamah bhism is known for his vow of bhramcharya , which make him decide the time of his own death. Which make me so eager to know more about bhramcharya and i think types of power that shree krishna and other gods have can also be acheived by us by raising our consciousness because we ourselves are the vishnu ( creator ). As we already had entered the energy age ( dwapara yuga ) people are awakening and realising what we are (atman) and i feel blessed that i get to know about nofap,semen retention, bhramcharya. Jai shree krishna🙏

You’re Welcome @Pandeybro . In that era, Till age of 25 Brahmcharya was essentially followed. Then also, Grihasth Brahmcharya was followed by virtuous persons.
So @Prabhjot0102 bro, a 12-year old who was not yet in puberty had to be Brahmchari for sure. You made great points by Paramatman & Atman dualogy. Bheeshma is one of greatest example of Lifetime Celibacy. Pls share your details here.
Jai Shri Krishna

For sure, bhramcharya was required by all in order to realize their true form. For example, when atman enters into prakarti (maya) it acquire a body and mind based on the its karmas of past life + thoughts at the time of death. So, now when an atman gets into the new body (baby) the mind of that baby get conditioned with good and bad things, which you can call sanskaar, good sanskars leads to good actions in the life, bad sanskars leads to bad actions in life but these sanskars are impressions of the mind. That’s why buddha also used to say bad people can also attain liberation because bad actions/karmas are just sanskars that mind had captured, being non judgemental without expectating anything from the action is the right source to live the life because then we don’t put the outcome of action in the parameter of good or bad. We accept it as it is. So, when a person practice bhramcharya his consciousness rises and he understand,feel what is real or not thus going on the path or real/truth the ultimate brahman. There were and are few known people who had raised their consciousness so much that they had realized who they are and had got the full control over their mind and body. Example, Swami Vivekanada, Osho, Sadhguru, Gautam buddha and many more in other religions too.

Very well said @Prabhjot0102 brother. Shri Krishna in Geeta said that We have to get Sanchit Karmfal but get away from collecting more by devoting every Karm to him. & No judgements here but Osho was a fraud cult-leader.
Asking you again to join here by sharing your details, so I can add to you scoreboard.

Ohh you’ve fallen since I’ve left but good to see you back up. Get going bro

@Taher thanks for Category change. Now pls Make Scoreboard editable by everyone.

Bro i am using rewre companion from browser so i couldn’t see my code on app, can you tell me how can one know there code from browser?

if you have app installed then you can share code, if not then others can’t connect with you and see your progress