___
In summary, this week has been off. Which is interesting since last week was really great.
It’s almost as if they were balancing each other.
Just called my insurance to report the car accident. Told them I had a side hussle of doing deliveries. I know, that’s a bad idea. But I just couldn’t lie. I managed to pass my computer programming midterm though.
I still am bummed out. And a bit frustrated.
All my plans are now on pause because of this silly incident.
But the one thing that truly bothers me right now, is that I relapsed. I didn’t have the urges to do so, but I got into the mentality, “oh something bad happened, I should get rid of the stress” excuse.
I regret it. I ruined a great streak for no reason whatsoever. Because it wasn’t even enjoyable.
I hope to get back up soon and get better.

×/×
I made another error. I fell back. It was silly, but I did. I’m coming back strong. But I must trust in the Lord, because I know I can not do this on my own. Still waiting for my car to be repaired. Been home quite idle. It is stressful.
Last night, I did not have urges. But I did it to myself. I gave myself the urges. I knew my mind was planning to relapse, but I let it slide.
Sometimes I sense my mind trying to make me act out these things, hence the urges. But I should not. And can not. It’s wrong.
Much to say, yet I do not know what.

RELAPSED
I really thought I had it. And the frustration I currently am going through is not letting me express my emotions. I’m so uncomfortable. I hate sin. I regret my mistake. I’m feeling drained and sticky. I feel filthy. My eyes are blurry and my regrets are flowing in. I’m being careless because I can’t comprehend this. I’m fearful, yet I’m doing what I fear. But I’m FAILING. Last night wa say 7, my testosterone being the highest, I started fantasizing on someone i dreamt of being with but I’m being selfish, disrespectful, and beta. But I dont know why this wont leave me. My mentality seems to be in order but then I forget. It’s almost as if the dopamine covers any logic form of thought. More on this when I have my head straight.

Changing mindset is not a quick process. It takes time. You’re changing thinking about yourself and it will benefit you in the future. You just can’t let relapses reset this process. You’re not beta. You’re much more than that. It’s not about dopamine or testosterone levels. It’s about you being great, you’re capable of that. Take some time to relax, no fears, no worries… Then it’s just you and actions you write down to make. 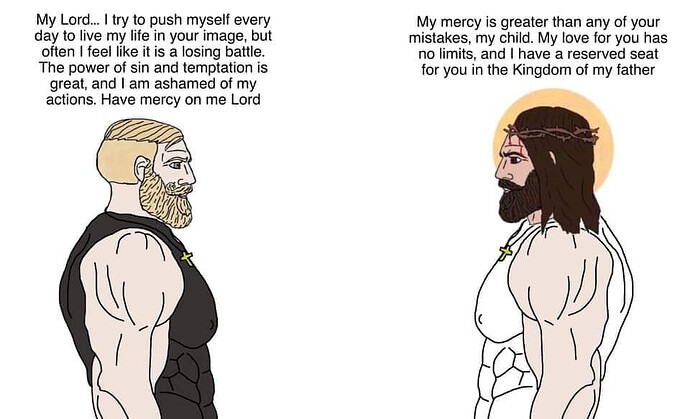 Very nice response Dear brother. I hope you are doing well. I agree, it is not a quick process. But perhaps, the process does not involve a relapse. It’s very hard to control the urges when they come out of no where.
While I agree, I am not a beta. I often think of the time I was turning into one. I spent two years chatting with girls and reading very erotic stories. But they were not even about reproduction. It was those sub male stories which really changed my mindset. I don’t really fantasize about regular arousal things, but more of a “kinky” lifestyle so to speak. Which is not right, and I would never want to let my desires cause me to commit such a thing as that in person. These triggers are very complicated and I have yet to know how to beat them.

TIRED
Last night I did relapse. After 7 days, my testosterone was at its peak again, which caused all sorts of water slides which in the end lead to a relapse. What was interesting is how, perhaps do to testosterone being so high on day 7, I felt as if I did a double if not more of a relapse. Not to mention, I relapsed again about 6 hours after. I started my day extremely tired, and frustrated. I did not think straight. It didn’t help that I had some issues as to where I live, and long story short, I’m supposed to move out, sunday the latest. Which is okay. I guess this is the start I needed. Perhaps, I can finally start my journey. But yet, I’m already thinking about failure. Sensing that in the near future my desires will overflow and once again, I’m where I started. Perhaps, this case will be different.

13
Today was exhausting. I had a nocturnal emission. I have not had those in a while. I do remember the dream, and I’m not proud of it. But life goes on, and so should I. I was very excited today, I went to work, and earn extra. Unfortunately, at around noon, some guy had rammed into the back of my car. Another accident, in less than a month. Not to mention the car was a rental. Gave me a minor headache but I’m doing okay. I’m so stressed out. I do not like living here in this place. There is sin all around me and I hate it. If there is one thing I will ever hate, it is sin. Because that goes against God.
But I still am confused. I try working and bettering myself, to get out of the miserable circumstance, yet it seems as if my fate is to just stay here and live with it. It makes no sense, yet it makes total sense. My mind is going crazy and I’m just counting my days to be called home. Do I take much more bigger risks to better myself? Do i just not do anything. I find myself being idle and my days are wasted. Yet when I work, I feel as if the world is attacking me. Im not sure what this is, and I have yet to figure out why. If only this pride would die already and I could focus more on the Lord.
On good news, today marks day 13, which is going to be my highest streak. I found it quite easy to reach this. With my circumstances being what they are, and this place feeling so vile, the thought of fapping hasn’t really occurred to me. I still have these evil thoughts that come into my mind, which I know one day will be thrown out into the lake of fire along with this adversary that is against us. And I know one day, peace will come and all this suffering will be long gone. Forgotten.
I just must be patient.

I can see that God’s Spirit is powerfully with you since you are calm even now. Don’t give in, brother. Just remember that Elohim has a reason for everything. He is still on the throne. Soon, one day you will look back at these trials and be glad (Romans 8:28).

+
I’m a few more hours of beating my highest streak on this app. I’m excited. Lots of stress lately but I’m still alive. I’m a bit confused though.
I have little to no urges, but I my body wants to enjoy the feeling of a relapse. It’s strange to explain, I have no dopamine nor hormones attacking me and honestly it’s so easy to ignore it now. But I don’t know what it is, like a “missing what it felt like” sensation. It’s weird and not sure how to explain it. Perhaps it’s my body wanting to be with someone or just wanting to get rid of the stress. But in some way, the stress has helped avoid a relapse. Not sure how to explain this feeling or if others have felt it. But I’m just waiting to beat that time

Today, I felt defeated again. I thought about ranting and stuff but I will just calmly type how I feel. And it’s not good.
I relapsed twice today. I’m truly falling back to my sins. But it makes no sense as to why. Currently, living still with my brother, but this place is a den of evil. They live such an upside down life, the place is a mess, and it’s just not somewhere a believer should be. And yet here I am.
I’m trying to find out why. Because it seems as if I’m being forced by some type of fate. I say that, because I’m not sure as to what is the reason for this. Ever since I’ve got here, I made my plan to work so I can move out soon. Yet life has its way of controlling what I do. It’s keeping me from work and so I can’t do anything but stay here and rot.
Last time, I don’t even know how but my car keys disappeared and I was so delayed to work and earn. Then I get into another car accident because some guy decides to go over the speed limit and ram me. Today, I was eager to work, but no where are my car rental keys found. They just vanished. This never happened until i got here. The place is impossible to find stuff. I’m trapped here not being able to leave without my keys. I’m so stressed because I feel so useless and insignificant and honestly, it feels as if life is just taunting me. My mind wants me to kill myself if I’m honest. But I still haven’t given up.
Unfortunately the stress of being trapped got to me and I relapsed. First time in over a year I actually went to a porn site. Usually I read something erotic, but I’ve relapsed so hard that today I went hardcore. Of course, my version of hardcore didn’t have any explicit things. But the fact I was on the site, was bad enough.
I still have not found my keys by the way.
I started thinking. I had a conversation with a security guard a while back, where I told him what was going on, and he said he thought it was witchcraft. Course at the time I did not pay much attention. But now that thought is roaming around my head. When I was at a younger age, heavy into “bdsm” or whatnot. I used to chat with some girls. One I thought was very strange yet we had our “weird” conversations and stuff from there. I sometimes wonder. I had asked for her forgiveness because I used her for lustful chats, (even if she did the same) and wanted to end off on good terms at least as friends. She said yes, and then I left. We used to be “gaming friends” on disc. So I left the entire online community there.
Either way, I don’t know why I think those things. The Book of Proverbs mentions something about “setting yourself free” which I still wonder what that truly means. I ended our “online relationship” or whatever that’s called. And it’s been over a year. I felt the Lord help me, and I know He set me free from sin and evil. But now, in this place. I feel back to square one. I relapsed and had horrible thoughts. I truly saddened Him. In the moments I tried blaming Him for all this. But it is my own doing. And I am ashamed. Perhaps it’s the pride in me, that causes me to rebel when all goes wrong. Perhaps all is going wrong because of my evil heart. Maybe my desires for success is not something good in God’s eyes. But surely living here is not good either, right?
So much iniquity. I’m slowly dying.
I have yet to know where my life is going.