Wtf is wrong with Google ads

I’m on day 16 of nofap, preparing for a big test. I have searched shit ton of stuff related to my test. Haven’t searched anything near to this ad I’ve gotten. Changed my age to 72 and selected “rather not say” in gender, just to not see the ads related to my age group (23yo), I’m a guy by the way and experienced terrible ads (triggering) because of that age group.

Well I’ve been quite active on a nofap forum and had been part of few nofap groups in few social media platforms. So I guess Google might have a concrete algorithm(or whatever) to understand that I’m studying and not interested in fapping or Po*n. What I don’t understand is how TF do i get this ad, and that sort of triggering image no wonder that could lead to relapse. What’s the conspiracy behind, does Google wants everyone to Fap ? 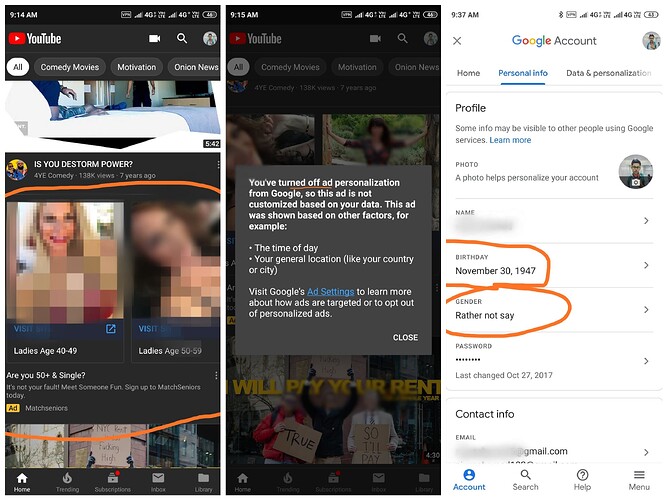 Oh man!!!
There was another guy in this app i met yesterday…he has the same problem…even im also experiencing this…idk why google is showing these ads to you even after you have changed your age and secrecy of gender is maintained…i use youtube for study purpose…but 9 out of 10 times i relapsed due to youtube

Its a big problem. I don’t think, Google is doing it to make everyone fap, but people, who buy adds on Google have too much money and power. Unfortunately, too many people use it, and like it.
My advice is to use addblocker browser or extention. Without any adds at all, you browsing surely gonna be less disturbing.

Google wants everyone to Fap.

I’ve even seen sexualized ads on this app, it just went away though when I pressed do not show again.

Hey it’s all ads marketing strategies. You might have visited an adult site earlier or searched something related to it , so what they do is they collect your information that is known as Google pixel and when they are marketing their ads through out the internet they retarget their ads to the audience with the Google pixels. It’s similar in Facebook also. Facebook was the first one to come up with audience targeting ads.

I believe the only solution will be to change your email and keep it fresh , don’t login to unknown sites. And use this account to access YouTube and if you still find these kind of ads then someone might have access to your IP address and sending their ads to you. Never use free VPN since it exposes your IP addresses.

Google wants everyone to Fap.

I strongly agree with this. Google just wants to make money, shit ton of money, and with cheap tricks, like selling your data with some advocacy terms and conditions which everyone would click agree anyway.
I’ve turned off personalized ads, changed the age again to “non binary” , use the best VPN in market (Express VPN), the first thing I do when I get my hands on a new phone is root it and install “adaway” and would use a non ads version of YouTube called YouTube vanced but these mf’s are sneaky af.
Not only that these motherfu**ers at YouTube headquarter, idk wtf or how tf do they build this algorithm where most of videos I get on recommendation would either have triggering thumbnail in it or Straight up the content that would most likely lead to a relapse/take you to a P site.
If I see the bigger picture them algorithms could be based on the previous data in which more dudes were on let’s say " X stuff" that leads to more views. And then Google automatically show these X stuff to the age group based on the past viewed audience.
After taking so many aggressive actions just not see a triggering ad, I’m still getting a little bit. I’m worried thinking about youngsters who’d get ads based on their age group, and no doubt would get hooked to P without realizing.

Google should come up with something like premium services, which enables users to opt out of ads completely. Do you think they don’t know about that, well selling data make them more rich than premium adfree subscription could.

PS : Most of the things I mentioned are based on my personal views, which is inclined towards nofap. I respect content creators and would pay for the content, I just don’t like ads.

I wonder whether there’s a database of something like a profile of individuals, that is built up overtime, or something to do with cookies.

Ironically, if I’ve purposefully looked for raunchy stuff on YouTube, recommended videos tend to be NoFap or Sex transmutation (and religious videos) - even though I’ve rarely watched them, so I also wonder whether they push related things, and things that occasionally viewed.
So I guess, if we spend loads of time on viewing NoFap stuff, and occasionally peeking at booty in the past, we get bombarded by the booty

But probably not - excuse my irrelevance.
Just thought it was funny, and glad I don’t get those ads.
I’m in UK, 37… I don’t know if that bears any light on the subject

Hmm, well that’s fascinating, I guess you got lucky with google…lol

Use as blocker bro for this purpose,only search result you can see. 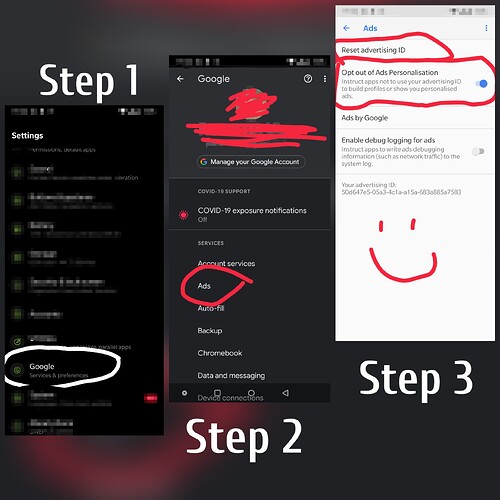 Thanks for recommending, however if you look I the second image, I’ve already “Opted out of personalized”. I believe perhaps that was the reason Google just thrown me a random ad.

Update on this Post : I’m using this adblock called Blokada. It’s an amazing app that blocks almost every the ad. Moreover, I’ve added my age as 45+, turned on the “ad personalization” and I keep my search strictly to the productive stuff.

This helps me, during the times I’ve turned off adblock or if get any accidental ad, those ads are generally related to dad stuff such as insurance, pension etc.

Although, did you reset your ads id?

Do it when using vpn.

I’ve been using ad-blockers for years and I don’t have such problems. Set up complete ad-blocking for your network, either using the hosts file and regularly updating it with ad sources or use this https://pi-hole.net/