For the study, Dr Kuhn and her colleague Jurgen Gallinat from Charite University, also in Berlin, recruited 64 healthy men between the ages of 21 and 45 years and asked them questions about their porn-watching habits.

They also took images of the men’s brains to measure volume and to see how their brains reacted to pornographic pictures, says the study published in JAMA Psychiatry journal (must credit).

They found noticeable differences in the men who abstained compared with those who regularly accessed sexual videos or images.

Dr Kuhn said ‘We found that the volume of the so-called striatum, a brain region that has been associated with reward processing and motivated behaviour was smaller the more pornography consumption the participants reported.

‘Moreover we found that another brain region, that is also part of the striatum that is active when people see sexual stimuli, shows less activation the more pornography participants consumed.’

However other researchers claimed that pornography in moderation was probably not damaging.

‘Dr Gregory Tau of the Columbia University, said: ‘Everything is going to be bad in excess and it’s probably not terrible in moderation.’

He said ‘It is possible that there are individuals with a certain kind of brain that are more susceptible to these kinds of behaviours.

Dr Kuhn said other behaviours, such as driving a taxi are linked to changes in brain size and functioning.

‘Basically everything that people do very frequently can shape their brain structure and function’ she added. 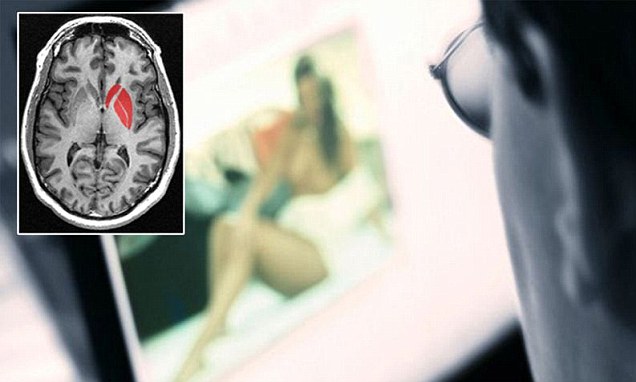 The Max Planck Institute for Human Development in Berlin said this is the first direct link between pornography and a lack of motivation.

Just as a miner remark. The brain is very plastic. Regions which are not used can be taken by regions which are more heavily used.
That one region shrinks doesn’t mean that your brain shrinks or that you become dumber. Just a reorganization.
Nevertheless, very interesting.