Note: This story is an attempt to capture my nofap journey in a fictional storytelling style. I thought about using badges as a driving point to inspre the story. hope you enjoy. 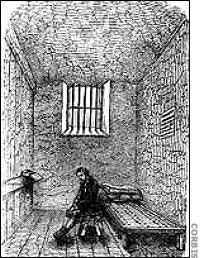 All I could say about it is that " I am used to it". I am used to be surrounded by these walls with no escape but the small window that put a hole up the wall that is against the iron gate of the shallow and empty room. There were three things that kept me company during my time here, which I have a fuzzy memory to remember when its start was, the worn-out straw bed, the view of the sky through the window, and the guard who became my friend. I don’t know if a genius has designed this prison especially for me, because the three companions were putting me through a cycle of torture which I grew comfortable to endure.
At night was the start of that cycle, when I lay on the rough bed to sleep, but it feels like every straw from the bed wants to impale my back. As the feeling of discomfort builds up and the sleep escapes little by little, I start to dare myself and look up to the window where the sky is usually full of stars. I am yet to define the feeling that immerses my heart as I gaze through that window to the starry night; it is almost like I long for something; something I had but was stolen from me. And my heart will then answer me with " That something is your freedom!". Of course, I would ignore such an answer, because it means that I must fight my friend and my third companion, the guard, if I believed in the answer that my heart gave me. The guard is my friend and my only way to have my freedom would be to betray him. I believeed somehow deep inside of me that betraying my friend Frotzon will bring only catastrophic ends to my fate. Although I try my best to force my mind to escape questioning my belief of such ends, my heart and its answer would defeat me and bring my mind to challenge my fears; and a war between my fears and heart would try to shake up my sphere of beliefs and comfort.
The war would happen every night, my heart would almost succeed to convince me to pursue the terrifying journey of my freedom, however my fears would resort in the end to the argument of my friendship with Frotzon which would always triumph over whatever strikes my heart have thrown. Except this night is different, I could feel that what was happening in the last week has shaken up the last resort which my fears would use to win the war!

As far as I remember, Frotzon was the only thing that sustained my sanity in this place. He is the guard who is responsible to my cell; responsible to deliver my daily meal and to accompany me to the relief room whenever I needed. My conversation with him, and the stories he brings from the outside world were my only escape. Eventually, I believed that he considered me a friend too. I thought he had no power over my situation, which is why I never bothered him with any requests even though I really wanted that bed to be changed at least. Again! Just like my lack of recollecting when and why was the start of my imprisonment, I also have no recollection of when and how this friendship has started. All I know is that he is a person who I was lucky to have as my guard, and I was happy that he kept me a friendly company. I would always have those delightful meetings with him, when he delivers to me my daily meal which consisted usually of bread, soup, sometimes meat or fish, and the sweet fruity drink which I was grateful to be served without being short even once from the daily meal. Enjoying that deink and conversing with Frotzon was the highlight that I would cling to for comfort and reconciliation against all the pain of being locked up in this prison alone for the rest of my day. But it has been a week since I didn’t have that joy; and it has been a week since I have opened my eyes to the heartbreaking memories that were concealed from me because of that drink. YES! I have found out that those smiles that Frotzon were facing me with were not out of love but mockery. And the stories he would tell me were not to provide me with a good company, but to test if the drink has taken its affect and played its role of making me forget the past – of who I was and why I am imprisoned here. The comfort zone, which I used to justify my fears and weakness and surrender to my unlucky fate which I didn’t remember what led me to, has become a spear piercing my back with betrayal and my ignorance!
I should have questioned every thing about my situation; then I may have not let all those clues go by unnoticed. I have never questioned the fact of why I was the only one in the cell, and why all other cells were empty too. It would have been ridiculous to think that I was the only criminal in the city, but that question may have revived some of the split fragments of my memory and reminded me of why it makes sense to be imprisoned alone for someone like me.
“There were many questions that I should have asked to myself and Frotzon. Was I as weak as I have been told? Or was my surrender to my imprisonment is a closeted agreement from me to what THEY decided? But again, Didn’t I have those arguments about freedom even though I lacked the memories that I have now to support my right to have it? Wasn’t the only reason that prevented me from acting upon what my heart has told me is my lack of reasons to support my right to have it? Don’t I feel angry now because of I have remembered?”

Perhaps longing for freedom has shattered my fears without me knowing; and that is why I got sick; so finally, this sickness could free my memory. At one night, a week ago, I got a stomach pain. I thought I would beat it first, but the pain grew stronger especially after an hour or two of my mealtimes. That pain would cause me to go to the toilet to vomit what I have had. When Frotzon noticed, he suggested to give me more of the fruity drink to give me strength and be easy for my stomach. However, the pain grew only stronger the more I had from that drink. And every time, I would vomit all what I drank. The last day, I insisted to not eat or drink anything; and to my surprise Frotzon got angry at me as he was trying to convince me to take some of the fruity drink. Although he protested that his intention was only to help me, his persistence made me suspicious, hence I met him with stubbornness that defeated his. He shouted at me that no body cares if I was sick and could end up dead; he told me about his commanders answer when he pleaded for a doctor for me. " Ah! Frotzon. I thought you were my friend, but I could see now through your lies and deception". At that night, and after Frotzon departure, I collapsed in one of the most painful nights in my life. I vomited in the far corner from my bed without calling for Frotzon to take me to the toilet. And at the end of the night, I fell asleep. Today, I woke up at noon; and with me woke up the memories about my past. When I used to have those arguments between my fears and my heart, I would contemplate the ways which I could escape this prison. Each time I would try to put a plan, it ends up with taking down Frotzon. Frotzon was the obstacle, but before I have realized his lies, I would give up on such plans without thinking further. I know now that I was imprisoned wrongly, and perhaps it was my fault. From now on, pursing my freedom and breaking out from this cell has become my purpose now. I have decided to be unbreakable, hence I have no excuse to fear what might face me. I have no choice but to face my mysterious future and bring down to my will what is in my control, otherwise, I must accept the humiliation I am in. The decision has been made; the plan has been put; Frotzon will try to stop me; I will go with my heart even if dragons’ fire awaits me.