What does the devil do?

Ok I’ve had this question ever since I looked deeper into NoFap and figured out what the science behind it was… And I found out that urges are due to a chemical release in your brain… I used to think that Satan was the guy who gave us urges but now that’s been proven wrong so I have no idea what it is that he does… Any help is appreciated!!

@StrawHatLuffy Ok but how does he manipulate us? Like take over our actions? As in he could make us go punch someone and we have no control? Sorry for so many questions

This is vast topic

I think I have a pretty good scientific knowledge about what you might be talking about. (Based on easy peasy and AVRT)
So our brain has two parts upper brain/ you part of the brain and lower/mid brain/beast brain, upper brain is the part where our intelligence and consciousness lies, mid brain is the part where addiction, impulses and all lie, it has the neural pathways of addiction and all which strengthen each time we indulge in that addiction.
So when you come across a trigger the mid brain/ beast brain hacks into your conscious brain/upper brain, it doesn’t let you think clearly and you indulge in the bad habit.
What’s good is that mid brain can’t perform motor functions only you part of the brain can do that like moving your body. So mid brain has to hack into upper brain to let you do so.
But if you treat both brains separately it is much easier for you to control the impulses.
I think what “Satan” Might be is the neural pathways of bad habits that have been created in the mid brain, to weaken them you just have to do one thing, recognise when it wants you to indulge in bad habits and just not do it, rather do something else, that’s it and overtime those neural pathways will weaken and disappear 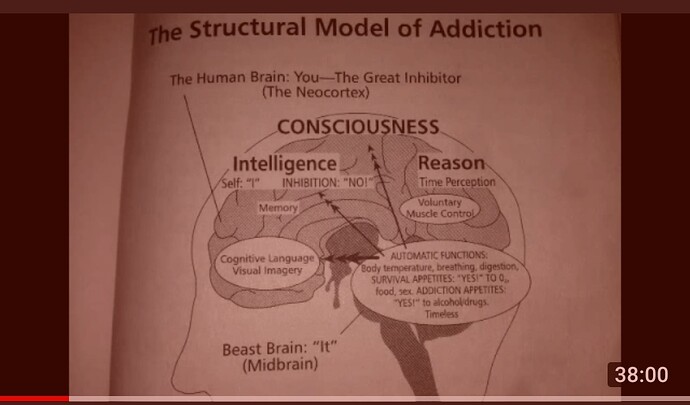 You can watch this video for more details on AVRT, this video is for getting rid of alcohol addiction but it works for any other addiction as well.

I think satan has a lot of to do with this.
The first one - to prove to you that he doesn’t exist and all things that happen is just hormones, accidents, coincidences. Nah, don’t get bought with this lie. He exists and he acts.
What is his main purpose? To destroy human. What is the easiest way to destroy him? To drag him into addictions.
What do satan does? Mimics God, only in reversed way. What is the most beautiful thing God created? Human - man and women. What did God told them in Bible - be fruitful! What does it mean? Human became God’s coworker. In their sexual act they generate new generation. Sexual act is sacred. What satan does? Tries to pervert good that was given from God. And here the porn comes! Did satan has this privilege to co-create the world with God? No. What he does? He hates people. And what is his wish? To destroy human.
Satan is a great “psychologist”. He doesn’t need to possess you, he works on emotional level. He knows you better than you know yourself and he is oportunist. He uses every single oportunity. He knows what triggers you and can give you some hints with pictures, person walking by and so on.
Of course there are chemical reactions because God created all the universe with it’s order, university, stars, worms, chemical reactions. And all this is given to the devil as well.
So chemical reactions are only half of true. Because you can lift and reduce those hormones not only with p***, but with, I don’t know, sugar as well, smoking, other things, but why do you chose PMO? And men don’t get addicted looking at rainbows or butterflies…
So think, and don’t reduce this to the chemical level. Because I don’t believe it’s the case!