22nd May, Friday, streak 38
It’s been 9 days since I reviewed the agony PMO caused me during the months of April and May alone. Over a month ago I posted how I was hospitalised due to an ulcer that I blamed on fapping. I blamed it on fapping because Swami Sivananda (who was once a medical doctor by profession) explained that one drop of semen is made from 40 drops of blood. He goes into detail, explaining that:

Out of food is manufactured chyle. Out of chyle comes blood. Out of blood comes flesh. Out of flesh comes fat. Out of fat comes bone. Out of bone comes marrow. Out of marrow comes semen.

It’s obvious that wasting semen on masturbation can lead to health consequences because the body keeps losing the nutrients it’s creating. In my case, when I became infected (without my knowledge) with a guttural bacteria called helicobacter pylori (a bacteria that causes ulcers), having fapped so many days of life, my body could not fight off the bacteria on it’s own. And so on the eve of April the 13th, as I relaxed on my bed, I was suddenly struck with an intense pain throughout my whole abdomen. It was excruciating. I couldn’t stop screaming. Luckily I was with my family and they rushed me to the hospital.

Being admitted into a hospital during the Covid-19 pandemic is stressful enough without experiencing the sensation that your stomach is about to explode. I sat in the waiting area for hours, groaning in pain, until a doctor finally become available to examine me. She diagnosed me with appendicitis, because they believed all the symptoms pointed to that. The next morning I was scheduled to go into theatre to remove what was believed to be an infected appendix. When the doctor removed the appendix, she noticed that it was just mildly inflamed and decided to do a scope to see if there was an underlying condition. It was then that she discovered the truth.

I awoke a few hours later after the operation in great pain as the anaesthesia started to wear off. It’s not a great feeling waking up drugged and in pain, especially when you’re waking up all alone in a hospital room because your family is not allowed to visit you to prevent the spread of Covid-19. I few hours later, my mother phoned me and told me the doctors found the cause of the problem, which was the ulcer: “A huge-ass ulcer,” as my Doctor later put it. They were supposed to keep me in hospital for a few days to watch for complications with the appendix surgery, afterwards they would discharge me with antibiotics and acid suppressants to treat the ulcer. Unfortunately this was but the brunt of my masturbatory karma.

The first sign that the worse was yet to come was when I awoke from sleep with the similar agony that landed me in hospital in the first place. I screamed for the nurses but they could not hear me and the panic button was too far to reach from my bed. I passed out from the pain and woke up screaming again until the nurses finally arrived to give me a plethora of pain killers, including a injection in my buttocks. But the pain would not subside. They thought it was post-surgery pain, so they did not contact the doctor to ask for advice. The pain eventually went away and I accepted that it was post-surgery pain, which is pain you experience when all the anaesthesia is completely out of your body. But the nurses who were doing blood tests picked up that my infection indicator kept rising as the days progressed. A normal person’s indicator should me >5, mine was over 200. It was the doctor that finally diagnosed that my ulcer had perforated - it burned a whole through my stomach (explaining the pain) and caused the bacteria that was in my stomach to escape to the rest of my intestinal tract. In short, I was dying from infection.

The doctor suggested we operate as soon as possible. The surgery included cutting me open again and cleaning my insides out with special liquids, followed by cutting a piece of useless fat from my stomach to patch the hole with. The surgery was successful, but I awoke with all kinds of pipes sticking out of me so that the fluid they cleaned my body with could completely drain out. I had a total of 3 cuts and 4 pipes sticking out of me. I had to be starved so the stitches in my stomach would not burst open. I was also given 12 antibiotics per day to kill the bacteria in my stomach. Due to the fact that I was not eating properly, the medicine induced horrible nightmares and hallucinations, coupled with the crippling loneliness of being isolated. I couldn’t sleep off the pain because I was afraid of the horrors I’d encounter as I closed my eyes. My mind, body and spirit were ultimately broken, and my finances were following in their footsteps.

I spent a total of 10 or so days in hospital, gradually losing my mind, experiencing more pain as they simply pulled each pipe out of me without any anaesthesia. I didn’t even have the energy to rejoice when I was finally discharged, although it was a welcome relief. I’ve been recovering at home for just under a month, but my medical bills are still not fully paid. I was a freelance writer before the Covid-19 lockdown. Being unemployed due to the lockdown is quite a challenge, especially because I’ve been mostly a freelancer who does not qualify for UIF. Now, I am in a debt of approximately $6000, but my father has taken on this responsibility on my behalf. This does not sit well with me.

After much praying and mantra chanting (IEOUAMS), I’ve been struck with an idea which could lead me towards financial freedom and independence. I I once had a dream of writing a book, containing some character and location illustrations. After my hospitalisation and subsequent review of the events that led me there, I realised that the world does not need more entertainment, even if it has an interesting moral to share. Entertainment is a waste of time. What people need is purpose, the tools to develop their creativity. Without a book to place my characters in, I have decided to sell their open files on ArtStation. I just need to tidy up the designs. I guess I’ll be transmuting my sexual energy into art now.

My first character and background for sale, Vex in his Oxerion Casual Wear: 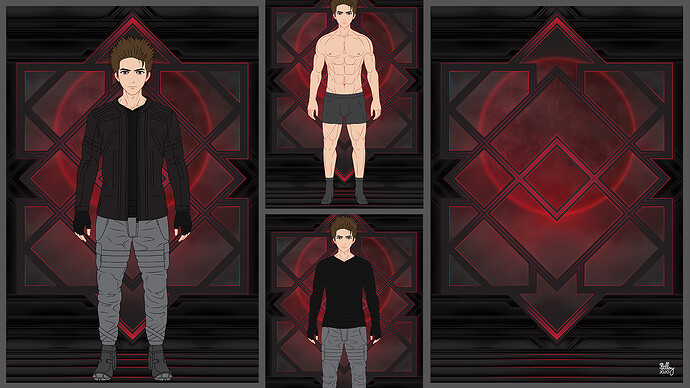 Vex_Thumnail1600×900 818 KB
My gut says I am making the right decision. I hope aspiring concept artists use him well. If you’re interested, you can purchase this ai. open file for $22 here: https://www.artstation.com/marketplace/p/azGn/vex-casual-wear-with-oxerion-background-character-and-background-concept-template-ai-open-file
Also feel free to share this with others who might find Vex of value.

I can’t wait to start on my next project. Giving up orgasms really opens your mind to new highs that are much more constructive and fulfilling

That’s a powerful story brother. Sorry to hear the pain you’ve gone through and where your actions have led you. It’s good to see you taking positive action now. Keep going man!

Thanks for the wonderful comment, Forerunner. Certainly put a smile on my face. Good luck on your journey. Much peace and love.