If you are Reading this You did the right thing! Did you know the System wants you to Fap? If you do, then you Probably know That they encourage fapping as “Healthy” Right?. Wrong they Encourage it To keep you induced in Watching P, They Encourage young Teens to Engage it Because the new wave is Fapping Not Cigarettes! Yeah I said Cigarettes!! it was Big wave in 70’s through Late 80’s that Cigarettes made you look “COOL” to get you to buy them and smoke them in the long run Get you Addicted!!! Its out there guys Lets keep our Minds open and Support each other and not let the System dumb us Down by feeling weak and unhealthy Lets keep pushing!!!

There are a lot such mechanisms. For example wasting evenings in front of the TV instead of doing sports, upskilling and building businesses.

In short, welcome to the modern world, the world which seems so promising due to all the inventions
But… you get it?
They are the same people who tell us people were weak back then, had lesser life expectancy. While there’s some truth to it (to some extent), people weren’t really that bad back then. They were mentally stronger. Patient (because instant happiness like today didn’t exist). This modern world, has brought its own set of miseries with it. People took advantage of it. They don’t just say fapping is healthy, they’ll also say alcohol is good. Is it really good?? These large corporations brainwash a complete generation of people often by using words like “researchers/professors at Harvard” saying this or that. I don’t even approve of allopathy these days. I many times give preference to alternate medicines and herbs that were used traditionally. These people in the name of “science” brainwash masses (just like religion). Today science is the new religion. Thus masturbating is “healthy”. It’s a whole lot more complicated than I told

I would not say science is a religion, the scientific method is the only thing one can trust in the search for any kind of testifiable information. A real scientist will not have a problem to have his stuff peer reviewed in other institutes, other countries in other political systems - he will be happy for feedback if helps to get a better hypothesis. A scientific study usually is in text aware of it’s limitations and expresses that. And science only produces hypothesis, not truth. The scientific method works for us:

The more severe problem is, some people are educated by memes mostly, memes are a religion.

Or industries create fake studies and whole systems of fake peer reviews like the smoking industry or fussil fuel industry or porn industry. Then blogs, journalism with agenda and social media do the rest. Memes that make you smile or wonder and by that transport something in your mind like a shard of racism or vaccination doubts. Social media is an echo chambers where you can totally concentrate on hearing what you want to hear and talk to like-minded people all day. And blogs are most times for money only or from guys with agenda even if it’s their own but actually they have it from the other sources.

I personally would not like to live in a world without tetanus vaccination for example. Modern medicine is mostly a good thing, except if commercialized for max profit like in the US.

When I read something to good to be true or Galileo style far away from consensus, sounds like agenda driven or extremely loud in mainstream media I try to use FLICC to check it. 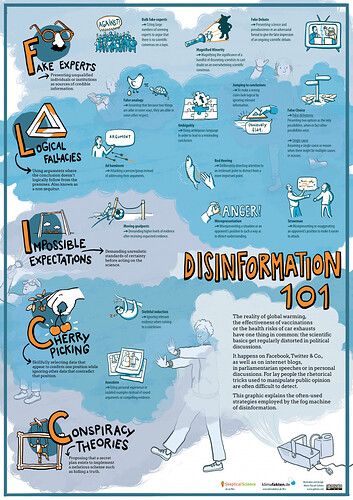 And most of the time FLICC applies to such info

You didn’t get my context
When I said science is new religion, what I meant is that people rely on articles which claim “a study by Harvard professors” just like they relied on priests back then. People have “blind faith” here. I never questioned “scientific method”, I simply said that this “scientifically proven” stuff is used too much in the articles. This is used to control the masses. Thus when they claim fapping is healthy which is “scientifically proved”, they will believe it. Anything that goes like this, people will believe it. That’s how science becomes a new religion today. Because people put their blind faith on things which are apparently scientifically proven. This is a means to brainwash people and thus food department also holds drug department. They’re literally controlling the thoughts of people and grabbing all the wealth. That is why I’m skeptic of allopathy nowadays and try to rely on herbs and alternate medicines.

Sorry bro I did not want to offend you by saying you’re a science denier. Just wanted to point out the larger context of stuff happening to us for readers.

You’re right that’s the essence. Scientific claims are used to transport any message and as long as it is labeled science (be it or not) people tend to believe it lighthearted. (Hope I got it right this time should not be staw man)

It’s like this old intentionally faulty study about chocolate helping to loose weight. It was a big headline and is still in some media till today because it makes a good clickable/buyable article for chocolate lovers. The real study was about if media falls for the fake claim and they totally did https://www.npr.org/sections/thesalt/2015/05/28/410313446/why-a-journalist-scammed-the-media-into-spreading-bad-chocolate-science?t=1597325668344

There is nothing worse for the world than flawed media, be it for inability, money or agenda.

It’s not just media actually, it is also the big MNCs
Chocolates helping in losing weight, the “scientific study” was funded by these companies. Quite obvious, because they want people to buy chocolates. Now, no one will buy normal chocolate (with added sugar), so they create “dark chocolate” and fund these “studies” that make them appear healthy according to those studies. They actually bribe these Harvard scholars. Thus they can claim that “alcohol is healthy” too (alcohol as in red wine, or some other type which is good for skin, hair). You may not believe me, however this is all true. It’s not just media, it’s a whole lot more complicated than that. People are being brainwashed in the name of science.

I’m not sure of the chocolates tho, however if you look at other products (eg. protein powder, muscle mass gainer, certain types of drugs and supplements etc.) The studies that these things help you in this way (gaining weight, better digestion etc.)
That this “insert some complicated scientific name here” helps you in gaining your muscle mass as the study shows. Thus you should buy the product. This is a game. We’re being played. In reality, these products may hold very little to no value (I don’t say they don’t entirely work, but you get the point)

Yes nutrition science is the worst of all. Because mostly it is based on a small sample set or even only questionaires. Also there are often side conditions that influence the data like… Let’s say a long term study with multiple questionnaires finds out 70 of 100 people in a sample of 200 who ate less chocolate lived longer (study made up by me!), but maybe they did it because they have less depression and need for addictions or in general a more active lifestyle or DO NOT FAP which could be the real reason, hehe. But the study might not take it into account. The study goes out to pre-publication (enought for a news article right?), it is flawed and might not be accepted by peers and the scientific community, never be published in a real scientific magazine… But companies start using the pre- or even self-publication for advertisement, journalists and bloggers as basis for articles, meme creators as meme inspiration. BAM a new myth is born.

Even worse like in the US even a company or lobby can found 200 “Institutes of Ultimate Health” or “Institute of superior climate science” with slightly different naming allover the country. And then fake science and reviews and publications happening in that eco system of nicely named fake Institutes with fake experts or no experts at all. - This shit should really be punishable… To straight out lie to the public and construct misinformation on large scale.

This is a great video on this topic from a great edx course that I took last year https://youtu.be/8i-fDTeHyd8 most relevant 2:00 +