Btw the goal I do more often is going for a walk because it’s more like exploring. I live in countryside and there are a lot of trees with a stream and it’s kinda hard to go there. I mean, the path is blocked by trees, bramble and thorns so it’s nice to discover new paths and places. (Mediterranean scrub)

What I find is often similiar to this

Now I’m still really young, the thing at elementary school happened only 5 years ago so you can get an idea of my age hahaha.

13? How the hell kids getting addicted to this crap so young?

Current streak: 5 days
Today nothing happened, I spent a lot of time making this

I made a program to help you during urges!

Instructions: Paste the code at the bottom of this post to a Python runner. If you don’t have one here it is. Run the code! The program doesn’t touch your files in any way, it doesn’t contain viruses or anything, it only generates text, I made it myself and even if I wanted to make a virus I don’t know how to so don’t worry the code is 100% safe =) CODE: https://justpaste.it/4x78k

I’m having an urge rn

you are having an urge, the probability you will relapse is 80% . you think more and more what you can do. you will feel like “aight i cant take it anymore” . but then an inner voice will come out from you will say fuck urges! im not choosing mediocrity, i will survive , i will stay patient! Now already the chances of your relapse becomes 50%. after that you start taking steps to stop urges. you meditate , go out in public , listen to music and you can even try “urge buster” exercise. this reduces chances for relapse to 30% . You did not choose to peak, it reduced your chances for relapse by 0%. now you look back and thank yourself that you did not relapse that time!

Got it!
And the chance will be -70% because it’ll be awkward to relapse after someone helped me!
Aight, I’m about to try to meditate, it’s the first time for me
Edit
I was watching a video about how to meditate and it was kinda boring and meanwhile the urge passed. Good.

I was watching a video about how to meditate and it was kinda boring and meanwhile the urge passed. Good.

I talked too early. I’m not going to let myself down, I did that enough, I look pathetic. It’s always “Yay streak” → “Sad relapse”.
I’m not saying I shouldn’t feel guilty, but it’s useless to keep being depressed and going “sOrRy I rElApSeD”.

Am I disciplined? Yeah!
Do I have honour? OBVIOUSLY!
Can an addiction defeat me? OBVIOUSLY NOT!

This thing is slowly killing me and I’m feeding it, I’m helping it to destroy me.
IT’S TIME TO STOP!
NEXT TIME I’M GONNA CUT ITS HEAD OFF!

Am I strong? (Not physically but) SURE!
Am I determined? YEAH!!!
Will I achieve eternal life? OBVIOUSLY!!!

You will definitely achieve greatness one day!

I won’t make any promises because I know where they lead and I also know I’ve said this before relapsing but
I think this time it’ll go better.

Acta non verba.
I’ve changed my approach and from now on I’ll rely more on God. With His help I’ll be able to overcome all the urges of this world.
I can already see an improvement:
I’m waiting for the next urge so I can try this approach.

I won’t just think that I want to go to heaven, I will remember that God wants me to success even more than I do, that to preserve my honour I MUST stop, that to ask God for help is enough to receive it, that I’m letting Satan fool me, that my guardian angel is always there helping me and that I will become a Christ’s soldier. (Thus the name of the diary)

There is also another reason for the name:
The crusade in my heart, because when I feel an urge part of me wants to do it and the other one doesn’t, the other part is the christian army and part that wants to do it is sin. Also because

And there was a great battle in heaven, Michael and his angels fought with the dragon, and the dragon fought and his angels:
And they prevailed not, neither was their place found any more in heaven.
And that great dragon was cast out, that old serpent, who is called the devil and Satan, who seduceth the whole world; and he was cast unto the earth, and his angels were thrown down with him.

Basically it’s because it’s war between sin and mercy, good and evil.
I’m getting back my initial motivation.
Homo faber ipsius fortunae.

Yeah man. I used to rely on myself too. But I’m human, and the defining thing about humans is that we’re not perfect. That’s why we rely on Christ. He will help us. Stay strong and rely on His strength, that’s what I do. Make sure to put on your armour everyday as well. Especially the sWord.

Nice man I like this approach, next time I’ll get any urge I’ll think about God. I do pray this from time to time though, but never thought of God during an urge

Thank God I didn’t promise yesterday…
But I’m not letting me down this time either. I’m a good person who made a bad decision, not a bad person.

I know some people here are atheists but I want to share these paintings of the archangel Micheal: 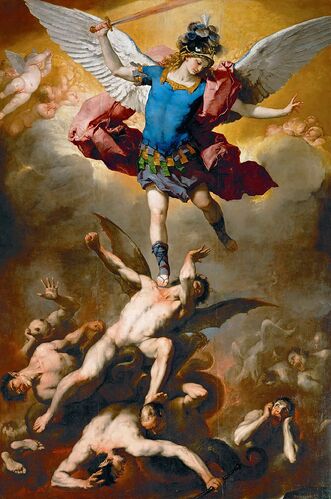 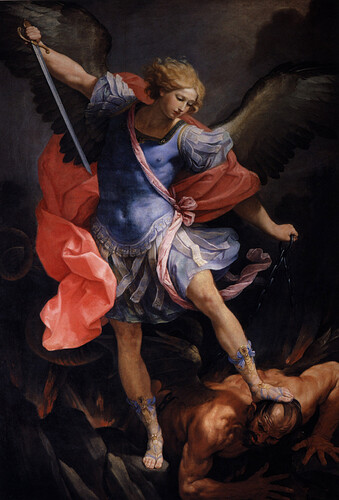 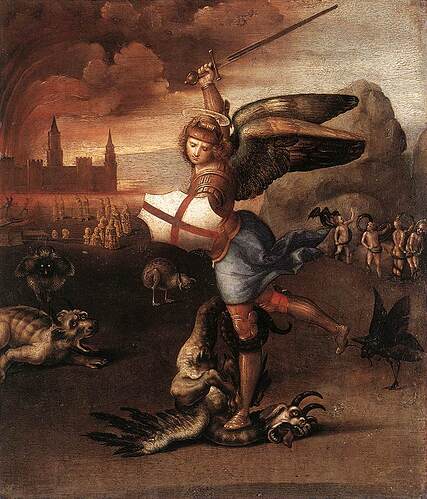 If you need context:
He is the leader of the celestial militia, who fought against devils and let them out of heaven. 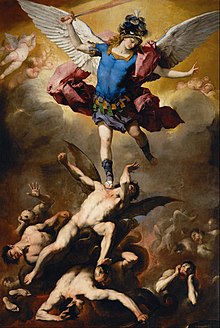 I don’t want to look like I don’t care about a relapse, I’m feelt guilty (Because I am) but being sad won’t give me my streak back.

By the way I’m really interested in the Apocalypse, the last book of the bible but I think I won’t understand it without reading the whole thing, I was planning on reading it this Summer just like my dad did when he had my age. What do you think?
It’s a good thing so I’ll read it all with the motivation of understanding the Apocalypse, but I’ll have to be organized because it’s really long XD

For real tho! Angels and the Apocalypse are really interesting! (≧▽≦)

Also!
There is another thing helping me, I have a catechism book called “Soldiers of Christ!” and we read it every Sunday. It’s interesting and motivating and educational! Wow!

Edit:
This topic is getting always more about christianity. Good.
(No offense Freeman!

Today I had a strong urge but it didn’t last long.
But it was strong, my heart was about to explode xD

I was thinking… Why do we have to study Picasso at school and not those paintings I sent last time? . _.
(Especially this one)

I love it!!!
Getting more determined about reading the Bible. I once started reading it but I couldn’t even finish the Genesis hahaha

Idea: from now one, every Sunday, when we do catechism I’m going to write here what we talked about and what we learned!

Also I changed the quote on my profile description from “Imperare sibi maximum imperium est” to “Etiamsi omnes ego non” and instead of the part of the bible talking about sexual impurity now there is the one about celestial militia and the war against devils from the Apocalypse.

I’m writing now because I relapsed. Again.
I should be more active in this diary I think it would help.
…
The problem is that when I feel strong urges I have a lot of pressure and I can’t think about anything else, that’s why I can’t think about why I’m quitting and what will happen if I relapse and if I don’t. It’s hard to explain, I mean, I breath fast, I can’t stay still, and I almost want to scream to let off steam. Then they say it’s healthy. But I’ve discovered that playing the violin, even if for like one minute helps me a lot to reduce the pressure.

I thought that “Just one peek won’t hurt”.

…I really feel bad, I feel like I want to cry even if there are no tears.