this one is pretty great too.

Yeah brother, This is epic.
accidently found the one

I was playing trivia with @GOVIND-19

accidently found the one

waiting to find the one in real life too

Last night update Serious stuff
Last night we had a good discussion about profile pictures and all then I played some trivia with @GOVIND-19 . I wasn’t sleepy even by 1 because I had a nap late in the evening after 4 pm, so I was up late, but one incident, I was scrolling through my insta and kind of stumbled across some triggering stuff, not that serious but still I had some urges and I was about to fall and about to search for erotic content but then I realized wth I was about to do, I am happy with my life the way it is now, can’t afford to go back to that shitty life, For the first time in my life I have biceps (14 inches, not great but still) and 4 packs, I used to fap so much I never gave time for my muscles to grow. I am easily able to do 8-9 hours of study whenever I want to, I remember last year before joining the forum my highest study time was 6 hours a day, I used to think that I can never cross this number, I even reached 6 hours rarely

. All this could have gone down the drain in a moment. Then I introspected what was the reason I came this close to a relapse and I figured it was just my mind playing tricks with me, I had temporarily deactivated my insta account earlier and my mind tricked me into activating it again, it was just a way of that little monster to stay close to his old addiction, tho I don’t follow any triggering account there but you never know what you will stumble across. Then I thought do I really need insta? The answer was I have some good memories on my profile so completely deleting the account was not an option, then what? But do I really need it in my day to day life ruining my mental peace? Answer was obvious, no. So I deactivated my insta account temporarily again and I am not gonna activate it until I get a job and get settled and I when I say this I mean it. Activating my insta account is a relapse for me now

.
After that I watched some B99 and slept (Too late around 5

, it really is a totka, that’s why first thing in the morning I spent a lot of time searching for the perfect super saiyan dp and edit it so that it could fit perfectly as per RC dp standards.
I woke up around 10. Very little sleep

Then after updating my dp and spending some time on 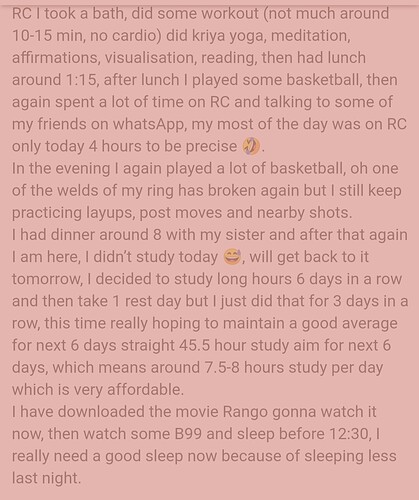 I wrote it and because of some internet issue it got ignored, luckily I clicked a ss so shared that

, don’t wanna write all that again.

Yup not gonna use it now.

Brooklyn 99, that’s a sitcom (situational comedy), it has 7 seasons with about 22 episodes each, I watch 1-2 episodes per day. Sitcoms are a part of my daily routine

, I finished modern family before this.

pictures and all then I played some trivia with @GOVIND-19 . I wasn’t sleepy even by 1 because I had a nap late in the evening after 4 pm, so I was up late, but

You remember me saying I wanna go to sleep early to wake up early? Yea I ended up sleeping at 2​:joy:

but I did get up early so not all bad

Yea I ended up sleeping at 2​:joy:

but I did get up early so not all bad

Shouldn’t really be boasting about that.

Now switching my internet off. Will not use RC till tomorrow night.

6th may update
I didn’t watch rango but spent some time talking to friends them watched 1 episode of Brooklyn 99, and went to sleep around 1, I didn’t keep an alarm and I am already ashamed before writing the next line😂 woke up at 11:30

, that’s 10.5 hours sleep uninterrupted, not proud of it but I guess it was much needed, I had been sleeping less than 7.5 hours from past two weeks and yesterday I slept only 5 hours so I don’t blame myself for it, it was bound to happen

.
Then I freshened up, worked out, did kriya yoga, meditation, affirmations, visualisation, reading, had milk and cereal, studied half an hour, had lunch around 2:30, studied a bit then again took 35 min nap

)
After that I studied with breaks till dinner, played a little bit basketball in the evening, had maggi and soya bean halwa for dinner, then studied till 11 with one break in between, in total 6 hours study. Didn’t use mobile whole day until 11pm, now I am gonna watch some B99 and sleep before 1.

Chd and hp are close enough

, almost same weather, but Himachal is much colder.

. Anything is possible now a days.
Where are you from btw?

username is his original name

btw name can’t reveal much about you. There are many samranjay in this world